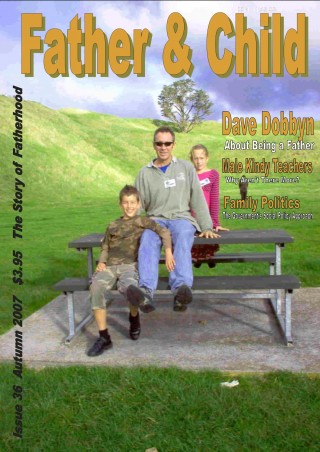 Has The World Turned?

As we were watching sport, did the world turn?.

I was in front of TV last week, dinner still warm in my tummy, paper spreadlazily around, waiting for the rugby, when for only the second ever time, I liked what I was hearing on Shortland Street.

A potential sperm donor was insisting that the child must have a father figure, or at least a male around, or it could be him. Now, this is Auckland, so the girl is gay, but at least the sperm donor insists that the child’s needs come first. The look on the ditzy girl’s face when the penny dropped, like she had been so going to have a baby with no male involved, but wow, what a good idea. Now we can negotiate the sharing and caring and off we go.

I don’t know how far this storyline will go, but it makes me proud that our state broadcaster has tied the plot’s next star to a father character.

Then, from a computer, of all places, I noticed a heading called Long Term leadership, and, before I could think, ‘What about the megabytes!’ my mouse had nailed it. Up came John Campbell, with his nicest smile on, about a youth mentoring scheme that maintains contact for ten years, taking video records every six months, and helps urban children, using the kiwi outdoor environment.

Matt Kerr, experienced outdoor adventure instructor, has discovered that exposing kids to risks and guiding them as appropriate, remaining interested and monitoring progress makes a difference. Do not get me wrong, this is not funny. After years of more and more children being supported by the government, with no guarantee of a positive male in their lives, the tide isfinally turning. but they make it seem like rocket science

It may be shifting numbers, but among the wins claimed by the government recently was that the number of registered DPB beneficiaries actually dropped in the last year. A small step perhaps, a result of a buoyant job market maybe? I think it coincides nicely with the case of a father who won the right to decide whether IVF eggs inseminated with his sperm could be used by his ex-wife, then said no. That and many other recent effort sand mentors. encouraging fathers

Also within this country, at a Preschool Teachers conference recently, it was claimed that NZ has the lowest number of Male Early Childhood Educators in the western world. If this statistic was ‘least women’ in say, ‘sport coaching’, we would have a national crisis, action would be forced on us immediately. Yet, as covered by Harald B-B in this and previous Father and Child Issues, children benefit hugely from interaction with adult males from their earliest years, so surely it should be considered negligent to run such a centre with no adult males present or entertaining?

Who knows? I might wake up in the morning, hear the Prime Minister insist that of the 20 free childcare hours, 10 are to be with an adult male, plus that the DPB now has a compulsory children’s developmental needs. The Warriors beat the ref, and the Chiefs beat the Crusaders, yes! [Ed—that was a fluke!] I raised both hands in triumph knocking dinner crashing onto the carpet. A cat meowed and the TV hissed, but had the world turned?

As the history of Father & Child is at an end, it is time to reduce the hosting costs and... END_OF_DOCUMENT_TOKEN_TO_BE_REPLACED

Meri Kirimete and Happy Holidays! Father and Child Trust Auckland welcomes our dads, families and supporters to their end of... END_OF_DOCUMENT_TOKEN_TO_BE_REPLACED

The NZ Family Court has never been so keen for input from Dads. Andrew Little has announced a review of... END_OF_DOCUMENT_TOKEN_TO_BE_REPLACED

Father and Child Trust have been hosting events during the week before Fathers Day since 2010. This carries on the... END_OF_DOCUMENT_TOKEN_TO_BE_REPLACED