As the history of Father & Child is at an end, it is time to reduce the hosting costs and maintenance of this website to a minimal level. If all goes well in the next few hours, it will magically convert from WordPress to static HTML, and retire to a cheap VPS somewhere in Texas.

I’m taking the opportunity to add a number of documents that were on the now-defunct NZ Fatherhood Foundation website. This organisation was formerly known as the NZ Father & Child Society. The original idea was that this would be a national co-ordinating group, and regional trusts would set up throughout the country to provide services.

When the domain fatherandchild.org.nz was first registered at the end of 1999, it was used by the national F&C Society, and they launched a website in mid 2000. I’ve made a few screenshots from the Wayback Machine to show how history unfolded.

Over the next few years, the Christchurch Trust was exponentially more successful than initiatives in other cities, and by 2005 Harald launched a new Christchurch-focussed site at fatherandchild.net.nz 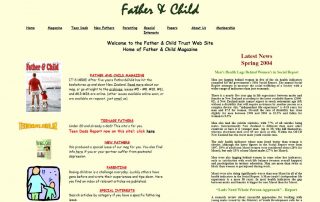 The mid 2000’s were when the peak of activity occurred in both organisations. While the Trust in Christchurch worked with increasing numbers of young fathers, the national Society was busy doing research, developing resources, and making submissions on legislation affecting fathers. Here is their website in 2007: 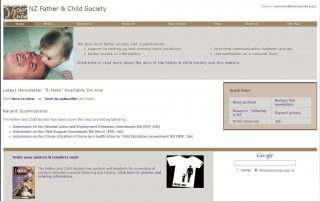 By 2008, most of the men involved with the Society had run out of steam, and it went into recess. The Christchurch Trust, on the other hand, was still very active, and celebrating it’s 10th anniversary. The news on the fatherandchild.net.nz website also reported that an Auckland branch of the Trust was being formed: 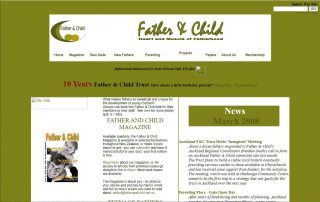 My involvement with the website began at that time, when I was asked by Harald to convert the Christchurch site to WordPress so that updates could be done by co-ordinators throughout the country. So that we could use the more appropriate dot org.nz domain, I shifted all the F&C Society material to a new website at fatherhoodfoundation.org.nz and fatherandchild.org.nz became the national F&C Trust domain.

Google Analytics report that since 2014, visitor numbers to this website in March consistently ranged between 5,000 and 5,500. Even with the organisation mostly defunct, March 2020 recorded 3,321 visitors, so there is clearly an on-going interest.

If you want to comment publicly on any of the issues raised here, the best place to do so is on another site I run: menz.org.nz.

« Father and Child Trust Winding Up

As the history of Father & Child is at an end, it is time to reduce the hosting costs and... END_OF_DOCUMENT_TOKEN_TO_BE_REPLACED

Meri Kirimete and Happy Holidays! Father and Child Trust Auckland welcomes our dads, families and supporters to their end of... END_OF_DOCUMENT_TOKEN_TO_BE_REPLACED

The NZ Family Court has never been so keen for input from Dads. Andrew Little has announced a review of... END_OF_DOCUMENT_TOKEN_TO_BE_REPLACED

Father and Child Trust have been hosting events during the week before Fathers Day since 2010. This carries on the... END_OF_DOCUMENT_TOKEN_TO_BE_REPLACED