Releasing The Woman In Your Daughter

As a grown woman, and arguably one of the most beautiful and adored women of her time, Marilyn Monroe lamented that as a little girl no one told her she was pretty.

Little girls, she said, need to be told they are pretty. Many in the self-aware, independent 90’s might scoff at such a naive desire for validation, but evidence suggests that little girls do indeed benefit from such praise. 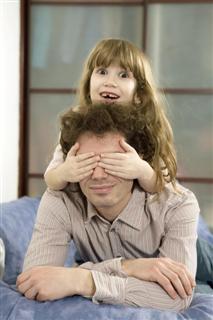 The task of validating a little girl’s femininity is an important role of the most significant man in her life: daddy.

Unfortunately, too many men do not take on their responsibility to their daughters.

Some have abdicated, choosing to pass the responsibility to others – mother, stepfather, teachers. Others are content with the popular myth that children, especially girls, do not need a father.

Still others are denied the chance by circumstances beyond their control.

However, more men are waking up to the reality that, even though it is as one writer put it, “the most polarised of associations”

The relationship between father and daughter can not only be the source of much joy and contentment for both, it is in fact one of the most significant relationships a woman will have.

A caring, loving relationship with her father will better prepare a girl for life in the difficult grown-up world.

It may also influence the nature and success of her relationships with all men: romantic, platonic, and business.

Many researchers believe that, psychologically, most boys develop differently from most girls. From very early in their lives, children are subjected to many messages of varying degrees of subtlety.

These messages come from many sources -parents, siblings, grandparents, teachers, television, the list is endless – and determine significantly how children feel about themselves and their environment.

Messages can be active or passive. Most of us are familiar with the stereotypical messages children receive. They can range from the active “You’re stupid,” or “You’re useless,” to the very subtle, passive messages about body image, violence, and respect (or lack of) for authority found in television, magazines and movies.

Margo Maine, author of “Father Hunger”, believes that the women’s movement has caused more “attention [being] given to the special problems for girls growing up in our culture”.

She thinks that “theories [..] stressing independence, separateness, autonomy, and individual rights cannot be used to describe women’s modes of thinking and functioning.”

Most boys are being prepared to look after communities, families or other units as a whole and in a protective sense by being “strong”, independent, isolated, detached from their emotions, in control of their environment.

Girls, however, may be taught more to put the needs of other individuals before their own. Maine says “as little girls watch their mothers and identify with them, they learn not only that relationships and connections are very important to women, but also that taking care of others is central to their lives.”

Subtle messages from their environment encourage girls to act and look a certain way, and further, that if they do not achieve a very narrowly defined ideal of beauty they are of less value than those who do.

Girls are taught more than most boys to nurture and refine the deep human desire and capacity for relationship. Psychiatrist Frank Pittman says in ‘Women and Their Fathers’ by Victoria Secunda, “When it comes to little girls, God the father has nothing on father, the god.

It is an awesome responsibility.” Daddy is the first man a little girl loves and learns to relate to. How Dad responds to her, and how he encourages her to respond to him, may largely form the basis upon which she will respond to all men with whom she relates.

With a keen sense of intuition, a girl will form an opinion about herself and women in general by watching how her father treats her mother and other women. If Daddy treats women with respect, she will learn that women are to be respected, and she will expect and demand to be treated so.

If Daddy is emotionally present she will learn that men can be so. If Daddy can connect with her, this will help her value her place in the family, and in society.

Relationships are important to girls.

1) Are we in relationship?

2) What is the nature of the relationship?

3) Who am I within the relationship? and

4) What is necessary to maintain connection within the relationship?” How Dad helps his daughter, actively and passively, to answer these questions will provide insights into the nature of her every male relationship.

“Numerous studies”, writes Secunda, “point to the fact that a woman’s capacity for a mutually loving and sexually fulfilling attachment is directly related to her relationship to her father.”

It is easy, therefore, to understand a girl’s sense of confusion, abandonment, betrayal and anger when she is denied a close connection to her father. When confronted with them, these feelings do not only characterise her early years. Unless adequately dealt with, they will plague her adult years also.

When parents separate, girls are especially prone to feel powerless. In her new environment, one in which Daddy features significantly less, or not at all, a girl will, according to New Zealand researcher Dimitra Demetriades, “experience the overwhelming truth that she can do nothing to change her new reality.”

Confusion and self-doubt do not result only when her parents separate. A girl may feel these things when her father, although living in the same house, remains emotionally distant from her.

Often, males’ and females’ conditioning comes into conflict when a daughter needs most the things her father is least equipped to provide. A man may model the things that he feels are “natural” – emotional distance, isolation, independence. But a daughter, needing the very opposite, may interpret the distance as evidence that she is the problem.

When fathers are physically present, but emotionally distant or cut off from them, “daughters feel deceived, incompetent, angry, unlovable, and somehow guilty. What did I do to lose my fathers interest?” (Elium)
Separation does not mean that a father cannot still maintain connection with his daughter.

“Divorce,” says Maine, “does not have to destroy your relationship with your daughter.”

It will require special attention, however, to how your daughter feels about the new dynamics of the relationship in light of the four questions above. As Demetriades notes, “An absent father is as much a role model for his daughter as any other father.”

A girl whose father actively withdraws from, or is prevented from seeing her because of a marriage breakup “will interpret her father’s absence in terms of what she perceives it says about herself.”

Marilyn Monroe spent much of her life trying to find the unconditional love and acceptance she longed for as a little girl. She led a lonely life of self-doubt and -loathing, had three marriages to much older men, and numerous affairs, mostly with emotionally distant, unavailable older men.

The most “adored” woman of her time died young, lonely and feeling unloved.

A good father, believes Dr. Martin Potash (in Secunda) “loves his daughter with no strings attached. He is available. He is both strong and tender.” Girls need fathers just as much as they need mothers. Girls do not need fathers whose sole function is to provide a home, food and clothes.

Next: Father And Son Reunion

As the history of Father & Child is at an end, it is time to reduce the hosting costs and... END_OF_DOCUMENT_TOKEN_TO_BE_REPLACED

Meri Kirimete and Happy Holidays! Father and Child Trust Auckland welcomes our dads, families and supporters to their end of... END_OF_DOCUMENT_TOKEN_TO_BE_REPLACED

The NZ Family Court has never been so keen for input from Dads. Andrew Little has announced a review of... END_OF_DOCUMENT_TOKEN_TO_BE_REPLACED

Father and Child Trust have been hosting events during the week before Fathers Day since 2010. This carries on the... END_OF_DOCUMENT_TOKEN_TO_BE_REPLACED