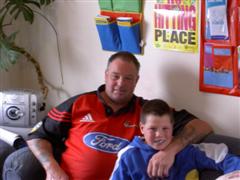 Coming home one day to find his wife and son gone without as much as a good-bye note, Ken O’Connell followed a long hard road to bring his son home—with a little help from Father & Child. Jonathan Young reports.

Two years of struggle, confusion, frustration and growth, have finally culminated in Malcolm O’Connell returning to live with his father, Ken.

Ken (now aged 47) was a self-confessed ‘basket case’ when his former wife left the family home , without warning, and took their son.

He went from being Malcolm’s primary caregiver, to having absolutely no contact with his son, and for several weeks didn’t even know where Malcolm was, or if he was okay.

After an initial period of disbelief, Ken accepted that his marriage was over, but was still desperate to continue his relationship with Malcolm. But because of a Court Order (which was later overturned) he could not have direct or indirect contact with his son initially. “I couldn’t even look for him. I felt like my whole world had fallen apart”.

Ken didn’t know where to turn, so he spoke to a friend who worked at the Salvation Army, where Ken had been a volunteer in the past.

They directed him to the Father & Child Trust.

Ken took every parenting course he could find, and worked hard to make sure he followed everything the Court wanted him to do.

“It made me more aware of the changes I did need to make to become a better parent. Although I thought I was a good parent, it made me aware of other things I could do to improve.”

Ken is a truck driver, and Malcolm used to spend much of his time ‘helping’ dad in the truck. Unlike some fathers, Ken was lucky enough to have an employer who was empathetic to his situation.

Lawyers visits and other appointments took up a lot of time and he was able to make his work schedule flexible to accommodate these.

Ken received constant support from his own parents. They were involved with emotional support for Ken, but also for Malcolm.

They encouraged him every step of the way, and without their support, Ken says he would have given up more than once.

“It’s been hard on them too. They used to spend a lot of time with Malcolm, and look after him when me and his mother were working. So Malcolm was missing out on his grandparents too”.

Ken felt that Malcolm’s strong attachment to his grandparents was a major factor in the judge’s final decision.
Because his wife had taken Malcolm to Auckland, the Family Court case was heard there, not in Christchurch where they used to live.

This further complicated matters for Ken, as it meant finding money for airfares for both himself and his mother to attend court hearings, as well as additional time off work. It also meant having an Auckland-based lawyer, so most of their contact was through telephone and emails.

It was several months before Malcolm had his first visit back to Christchurch. Until then Ken had only had spasmodical telephone contact, which sometimes upset Ken as he worried about Malcolm if the phone call
didn’t occur as scheduled.

Although Ken had paid for the airfares and waited at the airport, Malcolm was not on the plane. Outwards appearances might paint Ken as a ‘kiwi bloke’ and a bit ‘rough around the edges’.

However, he was visibly upset when Malcolm did not arrive.

Initially, the visits were ‘supervised’ by Ken’s parents. “They were good visits, but they were restricted by the supervision”.

When Malcolm did visit, Ken was very careful not to talk about the Family Court proceedings in front of his son. He often found it hard to relax, as he was worried that if anything went wrong during the visit, he wouldn’t be able to see Malcolm again.

Ken’s mother would accompany the pair wherever they went, including Ken’s truck where Malcolm was keen to get back to helping his dad at work.

The family worked hard to make sure Malcolm had an awesome holiday, but also not to spoil him too much as they didn’t want to feel they were bribing Malcolm into wanting to live back in Christchurch.

Ken can’t count the number of times that he felt like giving up. He says that sometimes it just felt hopeless, and that at every turn he was expecting to be made to jump through another hoop.

Ken made full use of the Father and Child Trust drop in centre in Christchurch, and the support offered to him by staff and other Trust members.

“Resources provided to me by the Trust were excellent, including support in Auckland as well as Christchurch. The networks and contacts of Father & Child trust were amazing.”

Ken was able to talk to other men in similar situations, and men who had regained their relationship with their children. When Malcolm would visit, Ken and his mother would often call in for a coffee and a chat.

The love and respect between Ken and Malcolm was obvious to all, and now they are frequent visitors.
After two years of Family Court proceedings it was finally decided that Malcolm would return to live with his father.

Ken had counted the days: “It was 706 days from the time they left, till the day the judge gave him back to me”.

“’Thank you’ didn’t seem like enough. There wasn’t a word I could use to say how happy and grateful I was”.

Ken feels that life is back to normal now. Malcolm is loving being back in Christchurch, and is settling in well to his new school.

Ken knows there is bound to be some bumps along the way, but is looking forward to the joys and challenges of being a single dad.

Next: Family Values In Politics

As the history of Father & Child is at an end, it is time to reduce the hosting costs and... END_OF_DOCUMENT_TOKEN_TO_BE_REPLACED

Meri Kirimete and Happy Holidays! Father and Child Trust Auckland welcomes our dads, families and supporters to their end of... END_OF_DOCUMENT_TOKEN_TO_BE_REPLACED

The NZ Family Court has never been so keen for input from Dads. Andrew Little has announced a review of... END_OF_DOCUMENT_TOKEN_TO_BE_REPLACED

Father and Child Trust have been hosting events during the week before Fathers Day since 2010. This carries on the... END_OF_DOCUMENT_TOKEN_TO_BE_REPLACED