Motherless children: Single fathers and their girls; Trouble at School: Boys and learning; Taxing Families: How income splitting could save you more tax than either party is promising for the election. 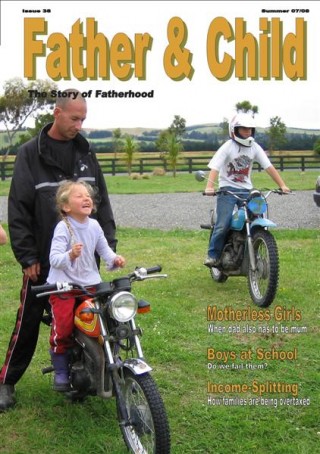 Finding a Use For The Families Commission

When the Families Commission was set up as part of a Labour-United coalition agreement after the 2003 election, United really wanted a (more or less) independent body that gives families a voice with government. MPs and government are constantly lobbied by groups representing minorities with sometimes urgent issues, but United wanted to know how families (for them preferably mum, dad and kids) could be supported and strengthened.

The Commission was set up with a ‘broad’ definition of family and the mission to undertake family research which informs government. During the consultation process interviewers were also told that the Commission should try to get the parents’ voice directly rather than through agencies. The ‘Couch’, an ongoing online survey at the Commission’s web site, is it’s only attempt at this which by default is neither representative nor unbiased.

Funded with about $7 million every year since 2004, it is only now that the set-up phase has been completed, according to United MP Judy Turner. The Commission started to get itself in the news – at first by making noises about domestic violence. It is involved in the current ‘It’s Not Ok’ campaign. But domestic violence is also a big topic with the Ministry of Social Development, the Ministry of Women’s Affairs, Child Youth and Family, the Office of the Children’s Commissioner and a range of community and social organisations, not to mention the Police which even have their own ‘Family Safety Team’. It is not clear what new the Commission had to add.

Publicity campaigns also have nothing to do with providing independent policy advice to government. To the contrary, it puts the Commission dangerously close to being just another arm of government ‘educating’ the community, when its job is to educate government with what the community thinks and wants.

Around the same time the Commission released a report advocating for much extended parental leave based largely on international comparisons. This, too, is not exactly new. International comparisons about parental leave arrangements were done when the current bill was drawn up, and the issue has been lobbied about, on and off, by the Greens, the Alliance, the Progressive Party, and also features in United’s family policy.

According to Turner the commission is involved in several other multi-agency projects. That would be useful if it could actually add the voice of NZ mums and dads, but currently the Families Commission is simply doubling up on some of the government’s work rather than break new ground.

Neither is its independence obvious—it is yet to ask government any uncomfortable questions or present it with uncomfortable research. Located in Wellington, it is likely that most of the Commission’s staff will have worked for a government branch before and they will be talking mostly to other government agencies. Quite possibly the Commission is merely part of a well defined political circle in the capital which reinforces and supports itself. This is not good. Once the Commission gets associated with the government of the day it jeopardises any claim for credibility with families.

That’s not what we were hoping for when the Families Commission was first set up. Try again, please.

Next: Trouble at School

As the history of Father & Child is at an end, it is time to reduce the hosting costs and... END_OF_DOCUMENT_TOKEN_TO_BE_REPLACED

Meri Kirimete and Happy Holidays! Father and Child Trust Auckland welcomes our dads, families and supporters to their end of... END_OF_DOCUMENT_TOKEN_TO_BE_REPLACED

The NZ Family Court has never been so keen for input from Dads. Andrew Little has announced a review of... END_OF_DOCUMENT_TOKEN_TO_BE_REPLACED

Father and Child Trust have been hosting events during the week before Fathers Day since 2010. This carries on the... END_OF_DOCUMENT_TOKEN_TO_BE_REPLACED