Catching the booze bus; Take the pressure down; Child labour in Godzone?; On the road again; Bringing back breastfeeding; Born to lead 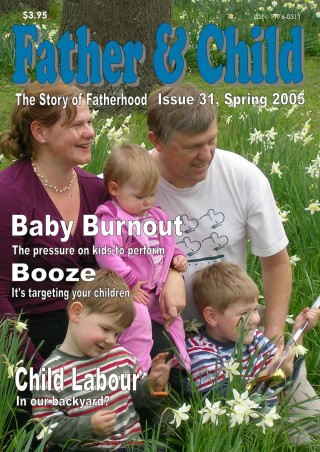 Possibly one of the more amazing results of this year’s general election is that so little has changed, despite the intense campaign (especially by the two major parties). Labour has lost its Maori wing, which now constitutes an independent party.

In total the seats on that side of parliament are almost identical to the previous term. On the other side of the House, National has recovered the following it had lost to the smaller parties at its fringe, and all but demolished them in the process-but overall very little has been gained on the right.

Which means that parents, and fathers, can pretty much expect from this government what they had with the last. Financially, the bulk of families with young children will be better off with this constellation, than it would have been under across-the-board tax cuts. Socially, things will go a little slower than they had otherwise.

Labour especially has been hugely out of touch with what is really going on at family level for quite a few years now. They have continued with legal & social policies that favour women over men, and mothers over fathers.

As a result, children of single mothers are much better connected to all kinds of services, than the children of single fathers are. Women still have many tools at their disposal to remove a father from their children’s lives, with no questions asked for which there is no equivalent for men.

At ground zero however, things have been changing anyway. Community funding may prioritise women’s projects over men’s, but government agencies have been finding ways to make some effort towards better father inclusion. Funding may not be equally available for organisations working with men or women, but at least this government is making money available at community level, and it does recognise that raising children is only partly one’s own business – it is also a service to both society and the economy.

The influence of a government in shaping the social make-up of a nation is probably overestimated anyway, and there is no indication that the general populace looks for the government for some leadership role in what people regard as their private lives. This essentially leaves our politicians to the task that our families all have enough to eat and a roof over our heads. In this regard, we’re not too badly off.

Next: Catching The Booze Bus

As the history of Father & Child is at an end, it is time to reduce the hosting costs and... END_OF_DOCUMENT_TOKEN_TO_BE_REPLACED

Meri Kirimete and Happy Holidays! Father and Child Trust Auckland welcomes our dads, families and supporters to their end of... END_OF_DOCUMENT_TOKEN_TO_BE_REPLACED

The NZ Family Court has never been so keen for input from Dads. Andrew Little has announced a review of... END_OF_DOCUMENT_TOKEN_TO_BE_REPLACED

Father and Child Trust have been hosting events during the week before Fathers Day since 2010. This carries on the... END_OF_DOCUMENT_TOKEN_TO_BE_REPLACED