Doing it by Themselves; Men at Work; Father of Three; Corporate Blues; Remembering the First Time; Meningitis; Constructive Conflict. 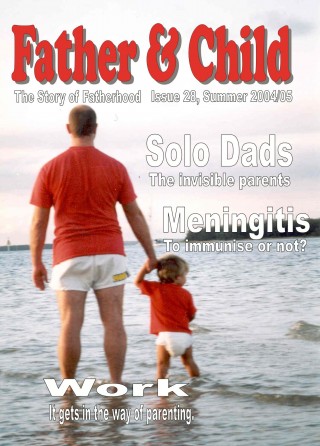 Two father-related jury verdicts made the news on the same day late in November.

Both were controversial and the decisions may or may not have been wise, but they showed a significant departure from previous cases and perhaps signaled that society is beginning to understand that the fatherhood role can throw a man into emotional turmoil as much as a woman.

In one case, a father, who had suffocated his baby after having learned of her disability, was acquitted of the charge of murder. He and his wife had been told that their baby would never be able to lead a life even remotely resembling ‘normal’, without any ability to speak, move, or even control her bodily functions.

The media had focused extensively on the circumstances of the case, which indicated the father’s deep emotional turmoil. I don’t think it is possible to make a judgement in the case merely from media reports, but the fact that a man could kill his baby and not be convicted is highly significant.

It is in fact a ‘privilege’ that is — legally —reserved for women. Under ‘infanticide’ legislation women have always been able to walk free after having killed their baby—but men were never considered to be able to be sufficiently emotionally affected by parenthood.

The other case is just as remarkable: it concerned a man having stabbed his ex wife resulting in her death. The jury accepted that he had been sufficiently provoked by her actions in withholding his access to the child — or granting it only very erratically — that he could not be convicted of murder, only manslaughter.

This verdict is in striking contrast to a similar case in Palmerston North some five or so years ago, where a man stabbed his ex-wife in the local Family Court after having been thwarted for years to gain any meaningful access to his children. In that case the jury took only two hours to find him guilty of murder.

So what has changed? It is possible that the recent case was different enough to the one in Palmerston North to justify the different verdicts.

But it is also possible that both cases reflect a society that has begun to understand that encouraging men to bond with their children right from birth does not only change outcomes for children: it also changes the man. And, like women, men can respond with deep-running desperation if that bond is threatened.

While the custody-related case has drawn angry responses from some feminist quarters, my feeling is they should rather rejoice: finally the justice system is starting to apply the same measures to men and women — for better or worse.

Next: Doing It By Themselves

As the history of Father & Child is at an end, it is time to reduce the hosting costs and... END_OF_DOCUMENT_TOKEN_TO_BE_REPLACED

Meri Kirimete and Happy Holidays! Father and Child Trust Auckland welcomes our dads, families and supporters to their end of... END_OF_DOCUMENT_TOKEN_TO_BE_REPLACED

The NZ Family Court has never been so keen for input from Dads. Andrew Little has announced a review of... END_OF_DOCUMENT_TOKEN_TO_BE_REPLACED

Father and Child Trust have been hosting events during the week before Fathers Day since 2010. This carries on the... END_OF_DOCUMENT_TOKEN_TO_BE_REPLACED