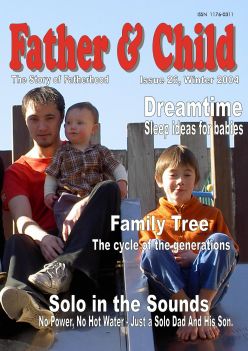 Time To Give Dads A Hand

Given the diversity of backgrounds and countries represented from the developing and the developed world, it was rather surprising how much common ground was found.

One of the most significant moments of the Summit for me was when two of the world’s leading researchers in the field, Michael Lamb and Charlie Lewis, declared that they had changed their point of view: they had maintained throughout most of their careers that there is no specific fatherhood component in parenting-the benefits from father involvement resulted mainly from an extra helping hand from mum,and anyway father involvement was often to insignificant time-wise to have an effect.

After doing a comprehensive review of the evidence, they said they can no longer uphold this view: father involvement, especially in the early years, predicts specific outcomes that mother involvement does not predict. They conclude that “Policy makers must do more than pay lip service to [the father’s] role.

On the strength of the [research] evidence presented [in this report] we challenge politicians, professionals in health, social services and education, and representatives of non-government organisations to examine the provision made for supporting fathers in families”.

Another chapter in the report reviews the impact of policies and government legislation on fathers and children. Authors Graeme Russell, who in 2000 authored a comprehensive report on fatherhood commissioned by the Australian Government, and Adrienne Burgess (Fatherhood Reclaimed) urge various changes in the delivery of social and health services, especially where they involve ‘vulnerable children’.

Looking at New Zealand I cannot help feeling rather disheartened by quite how much mother-focused (rather than family-focused) both our policies and practice are, and just how far we are away from meeting any of the recommendations listed in this report.

As long as this is going on, we cannot really claim to be serious about looking after our children.

Next: Fathering In The Sounds

As the history of Father & Child is at an end, it is time to reduce the hosting costs and... END_OF_DOCUMENT_TOKEN_TO_BE_REPLACED

Meri Kirimete and Happy Holidays! Father and Child Trust Auckland welcomes our dads, families and supporters to their end of... END_OF_DOCUMENT_TOKEN_TO_BE_REPLACED

The NZ Family Court has never been so keen for input from Dads. Andrew Little has announced a review of... END_OF_DOCUMENT_TOKEN_TO_BE_REPLACED

Father and Child Trust have been hosting events during the week before Fathers Day since 2010. This carries on the... END_OF_DOCUMENT_TOKEN_TO_BE_REPLACED