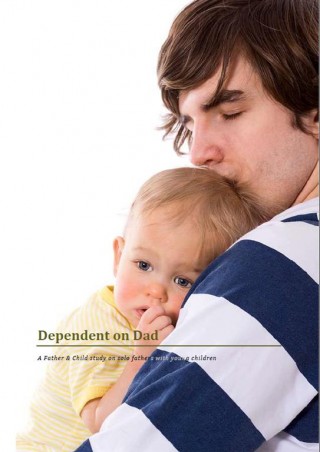 Depending on Dad is a Father & Child study of fathers with children eight and under where there is little or no mother involvement conducted in 2009 and published in 2011.

Many solo fathers present to the Father & Child Trust as having high social and health needs, and some raise very young children. Yet they appear to be absent from any public discourse on family, parenting and social policy.

The 13 solo fathers in this study were selected from clients of the Father & Child Trust where mother involvement was particularly low (less than a day per week) and children young (eight years or younger) to capture those families where children are very dependent on their parents but support cannot be provided through avenues targeting the mother. As such, solo fathers can be seen as an ‘indicator family’ when it comes to the effectiveness of the reach of family services, while at the same time they may have some support needs specific to their situation.

The study asked detailed questions from respondents about how they felt as solo dads, what they saw as issues for themselves and their children, where they got their support from and what else would help, and about their own background.

Most of the respondents came from socio-economic backgrounds that have many of the indicators defining an ‘at-risk’ family: they had a low income, left school early, had low educational achievement, were generally young (24 years on average), tended to come from single-parent homes themselves and have experienced sometimes problematic upbringings, and were more likely to have a criminal conviction. Seven of the 13 fathers had children three years of age or under. The children had also often experienced significant adversity before they came into their fathers’ care, which in five cases (38%) occurred after Child Youth and Family intervention.

The fathers were moderately positive about their capability as male solo parents, but a significant proportion was somewhat unhappy with the situation. Half of them ‘would not want to be a single dad if there was another way’ and the same number felt that their children ‘miss out because I don’t earn as much money as a father should’. For both these statements fathers with older children (4-8) were significantly unhappier than those with younger ones (0-3).

Work, and hence money, loomed large in the minds of the respondents. ‘Helpful employers’ ranked second in support needs only to ‘more money’, and 85% (or 11 dads) believed that it is important to have a good income to provide children with opportunities. This was seen as more important than, for example, a ‘mother figure’ in the child’s life (important for 54%, or seven dads). Overall, the dads were not looking to the government to provide them with an income, and while not thrilled with Inland Revenue or Work & Income they were not particularly unhappy with these agencies either.

The isolation of the fathers and, therefore, their children stood out. All but one father indicated isolation and/or depression and a majority did not engage in social activities such as having children’s friends over, going to the library with the children, or parent-helping at school or pre-school. Eight (61%) felt they were ‘missing out on a lot of social opportunities’. At the same time many fathers told the interviewer about a significant amount of stress they found themselves under.

But, perhaps staunchly, the dads did not seem to believe that this significantly impacted on the children: seven (54%) thought they got ‘enough breaks’ from them, all but one believed their children are ‘happy’, and most fathers did not think their children were not spending enough time with friends or outdoors.

The fathers drew support primarily from their own parents, especially their mothers, perhaps a result of their young average age. The maternal grandmothers also often stayed involved, although their influence was not always seen as helpful. Support persons from the rest of the family mentioned by the fathers tended to be male, which correlated with a finding from the Supporting Kiwi Dads study (Luketina et al, 2009), which indicated that solo fathers are more likely than average to talk to other male family members about fathering.

Solo fathers with children three and under generally rated support needs much higher than those with older children. Overall they seemed more focused on the children and placed a higher value on their role as caregivers. They were happier to be solo fathers than dads with older children, somewhat less focused on money and more on parenting information. ‘Someone to talk to’ was identified as one of the most important support needs, well ahead of a support group, which was a more popular option for dads with older children. However, they also felt more supported than the fathers with the older children. Where an early intervention service, such as Early Start, reached them, they felt this was very useful.
The fathers were asked to differentiate how useful a given service was for themselves as opposed to the ‘family’. All services were generally considered less useful for fathers than for the family overall, but the difference was small and there was no indication that they were any less effective or appropriate than they would be for mothers. However, ratings were overall quite low. Plunket in particular was not seen as useful for fathers and was the lowest ranking agency for this, even below Child Youth and Family – a disappointing result considering that Plunket nurses are the key referrers for a number of services. Unlike many other professionals – midwives, parent educators or social workers – no Plunket staff was seen to have made a real difference for any particular father or child in this study.

In addition, services targeted at young children did not seem to reach fathers when they were either still in a relationship with the mother, or were separated and did not have sole care of the children at the time. Where fathers were not connected with services at this time, it appears to be more difficult for them to access them later when they and their children need them more. This provides a strong case for father inclusion in early childhood services regardless of the care arrangements at the time.
From the results it must be concluded that solo father families with young children should be a target group for government social programmes. Additionally, a number of factors were identified as risk indicators, particularly social isolation and parenting stress. Yet there is little evidence that the social service sector at present has enough capability of reaching and working with men who are caregivers of children.

The results indicate that more research is needed about how men become solo fathers, how children develop in their care, and what experiences they have had with social and health services for themselves and their children.

As the history of Father & Child is at an end, it is time to reduce the hosting costs and... END_OF_DOCUMENT_TOKEN_TO_BE_REPLACED

Meri Kirimete and Happy Holidays! Father and Child Trust Auckland welcomes our dads, families and supporters to their end of... END_OF_DOCUMENT_TOKEN_TO_BE_REPLACED

The NZ Family Court has never been so keen for input from Dads. Andrew Little has announced a review of... END_OF_DOCUMENT_TOKEN_TO_BE_REPLACED

Father and Child Trust have been hosting events during the week before Fathers Day since 2010. This carries on the... END_OF_DOCUMENT_TOKEN_TO_BE_REPLACED