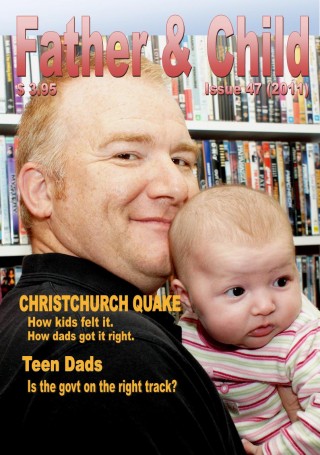 Is There a Big Picture?

The Income Splitting Bill that recently went through select committee and is likely to be voted down in parliament is one of those rare occasions where Father & Child Trust made an exception to its rule of not getting involved in the legislative process.
The bill is about treating parents who live together as an economic unit for tax purposes. At the moment everyone gets taxed individually which hugely disadvantages couples where there is one main income earner.
Testifying before the select committee I was getting a bit frustrated that our political elite didn’t seem to get the point at all. I was asked the question, for example, whether I didn’t think there were better ways to resource income-poor families. In the public discussion about the bill in the media it was also all about who gets to benefit most—yet this bill was not introduced at all as a handout for disadvantaged families.
The problem is that taxation of families and any government assistance is as much a piecemeal affair as social policy. Government and opposition seem to focus on a small part of any given issue and then throw money at it to fix it.
The Income Splitting Bill should be a no-brainer on the face of it: if one couple earns the same gross income as another they should pay the same amount of taxes, right? As parents they are an economic unit.
Government buys into the economic unit thing when it comes to handouts: you can’t claim the Domestic Purposes Benefit if you’re living with a partner who is earning. Working for Families is also calculated on your joint income.
It’s the same inconsistent mess in social policy. When a baby is born, only the mother and father are legal guardians and, by virtue of the Guardianship Act, are asked to make all major decisions jointly. Being cared for by (both) your parents is even a right of the child through the UN Children’s Rights Convention.
But when it comes to social programmes no effort is made to treat the parents as a unit for parenting purposes—instead, services run on a ‘primary caregiver’ model, where only one parent is entitled to assistance, financial or social. There is not a single government-funded programme in New Zealand that helps parents parent together, with the possible exception for the free, one-off ‘Parenting after Separation’ courses after you have separated.
The discussion we should be having is not who is most disadvantaged or who benefits most from a certain piece of legislation. It should be on whether as a nation we support parenting as a joint responsibility of the mother and the father, living together or not, and align our legislation and services to this big picture.

Next: Children After the Shock

As the history of Father & Child is at an end, it is time to reduce the hosting costs and... END_OF_DOCUMENT_TOKEN_TO_BE_REPLACED

Meri Kirimete and Happy Holidays! Father and Child Trust Auckland welcomes our dads, families and supporters to their end of... END_OF_DOCUMENT_TOKEN_TO_BE_REPLACED

The NZ Family Court has never been so keen for input from Dads. Andrew Little has announced a review of... END_OF_DOCUMENT_TOKEN_TO_BE_REPLACED

Father and Child Trust have been hosting events during the week before Fathers Day since 2010. This carries on the... END_OF_DOCUMENT_TOKEN_TO_BE_REPLACED