Although created on a bit of a whim, our survey of fathers at the Waitakere Toddler Day Out in April surprised everyone.

Queues were forming at our stall as dads jostled to fill in the forms for the reward of a free copy of Father & Child magazine. The final tally was 124 – more than the whole event got in feedback!

Along the way, many discussions were had and many questions answered. Brendon and our volunteers were too busy even to take photos.

The survey wanted to know if dads felt well supported in Waitakere, and what kind of agencies they’ve had face-to-face contact with.

Overall these dads were quite a happy lot, with majorities saying they feel well supported with things like early parenting courses, fun events for dads and kids, or support for the family. Still, more than 40% thought new dads’ needs are not well met, and almost half felt separated or solo dads aren’t well supported.

This didn’t include the separated dads themselves, which made up about 15% of our survey dads. They felt better supported than any other group, especially when it came to relationship courses, counselling or parenting courses.

So, ironically, information and support seems to be easier to come by when you’re not living with the mother of the child—perhaps because people can’t assume that speaking only to the mother will somehow get the information through to dad as well.

And despite a bout of new initiatives for new dads—there’s now a gift pack available from DIY Fathers in Wellington, several booklets have been produced in recent months, and even a DVD featuring Tiki Tane—new dads were least happy of all.

More than any other group they made the distinction between support for the ‘family/parents’, which 83% thought was good, and ‘new/young dads’, which half thought was not good. 29% thought there wasn’t enough info on early parenting for them, the highest number for any group of dads.

Sports Clubs and Playcentres, on the other hand, got the thumbs up from dads. Fathers who had face-to-face contact with these felt better supported as a family, more encouraged to participate, better supported as dads and had better access to relationship courses than average.

Sports Clubs patrons were particularly positive about just about anything, and were far more likely to have made contact with kindergartens or playcentres as well. They were quite a bit less likely to have been seen by Plunket, though.

Of course, amongst the organisations listed on our survey form, sports clubs were the only major ones where dads could expect to find a lot of other dads.

Sports Clubs would have a distinctly different culture as a result, and apparently some support is available there, or at least information where support can be found.

Both, Playcentres and Sports Clubs are places where dads can be involved hands-on, and where this involvement is appreciated rather than merely tolerated.

The results for Playcentres, a predominantly female organisation, are particularly encouraging. They show that organisational attitudes can make a big difference. 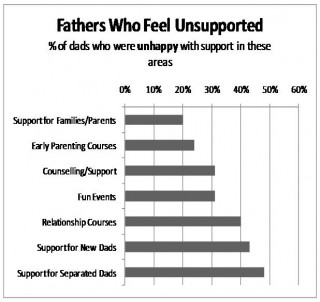 Interestingly, both Playcentre and Sports Club patrons were more likely than average to live with the mother of their children.

Obviously, more research is needed whether father support, or support for parents as a couple, has a stabilising effect on the relationship, as our small survey indicates.

As the history of Father & Child is at an end, it is time to reduce the hosting costs and... END_OF_DOCUMENT_TOKEN_TO_BE_REPLACED

Meri Kirimete and Happy Holidays! Father and Child Trust Auckland welcomes our dads, families and supporters to their end of... END_OF_DOCUMENT_TOKEN_TO_BE_REPLACED

The NZ Family Court has never been so keen for input from Dads. Andrew Little has announced a review of... END_OF_DOCUMENT_TOKEN_TO_BE_REPLACED

Father and Child Trust have been hosting events during the week before Fathers Day since 2010. This carries on the... END_OF_DOCUMENT_TOKEN_TO_BE_REPLACED