I remember when my children were one or two years old and I found myself exhausted a lot of the time, both mentally and physically. At the time people said things along the lines of – ‘oh, that’s nothing, wait till they’re teenagers’.

Now that this time has arrived I can truthfully say they were wrong. Although most certainly rather challenging at times, my offspring proves to be not particularly troublesome as teenagers, at least not yet.

Which, in turn, makes me think that perhaps the tremendous energy we put into them when they were little may have paid off after all.

Being a teenager is different from anything that went before and anything that comes after, though. While we tend to blame this on the hormonal surge, science has since come up with a better explanation: brain development.

It turns out that, starting from about age 13 and lasting for a good ten years, parts of the brain undergo another stage of ‘strengthening and pruning’ in exactly the same way as they do in early childhood development.

For some time now we have been told that the first 2-3 years are the most important in a human’s life, because the way the brain is ‘primed’ then for the rest of its life. That appears to be not quite true: teens get a bit of a reboot, too.

Their brain re-develops back to front, which means physical coordination (and also emotion and motivation) develop first. Teenagers can be very high achievers in their chosen field (sports especially) and be highly driven.

Unfortunately the part that develops last is the prefrontal cortex, which controls reasoning and impulses – the umpire of your urges and drives. The result is a preference for instant-reward activities that offer a lot of excitement and extremely poor judgement about consequences. Sounds familiar?

As with the brain of little children, the input they get at this time matters a great deal and determines the ultimate shape of their brain. ‘Strengthening and pruning’ means that neural connections that are not being used are being discarded, while those used often are strengthened. 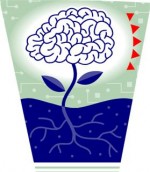 In other words the brain will not just learn impulse control by itself! In many ways, a brain is not really too different to other organs, that develop according to use. If a couch potato tries to run a marathon, his heart and lungs will give out a few minutes into the run.

We know this is also true for academical learning, and that’s why we encourage our children to succeed at school, but it is often forgotten that the brain also steers all our emotions and behaviour.

Brain development brings opportunities, but also dangers. The biggest danger by far is alcohol. Like no other substance or drug it disrupts the development of the brain, and teenage binge drinking has long-term consequences.

What’s more, peculiarities of the teenage brain mean that they are being egged on to drink even more, when an adult brain would already become sleepy. American researcher Scott Swartzwelder, whose research team tried to replicate those effects in rat brains, said “teenagers can drink far more than adults before they get sleepy enough to stop, but along the way they’re impairing their cognitive functions much more powerfully”.

Another researcher, Fulton Crews from the University of North Carolina, analysed adolescent and adult rat brains after a few days of heavy alcohol exposure, and found that the permanent damage in the forebrain was at least twice as extensive in adolescents, and spread to areas completely unaffected in adult brains.

This is bad news in a culture as relaxed about teenage drinking as ours.

And it is difficult for parents to exert the right amount of control short of putting them under 24 hour surveillance. Trust inevitably takes a hammering when kids grow into teenagers: for them, as they are now smart enough to have doubts about the decisions their parents make, and for us as we discover we are being lied to about things we would consider quite crucial.

How much influence parents have over their teenagers depends on the relationship they have. Teens crave to be respected and treated as adults, but it is hard for us not to see the children in them we have known for so long.

At some stage we have to make the switch: changing from telling them what to do to genuinely involving them in decision-making even about something as mundane as household chores.

Responsibility cannot be learned without some decision-making power.

Next: Archives: Hungry For Dad

As the history of Father & Child is at an end, it is time to reduce the hosting costs and... END_OF_DOCUMENT_TOKEN_TO_BE_REPLACED

Meri Kirimete and Happy Holidays! Father and Child Trust Auckland welcomes our dads, families and supporters to their end of... END_OF_DOCUMENT_TOKEN_TO_BE_REPLACED

The NZ Family Court has never been so keen for input from Dads. Andrew Little has announced a review of... END_OF_DOCUMENT_TOKEN_TO_BE_REPLACED

Father and Child Trust have been hosting events during the week before Fathers Day since 2010. This carries on the... END_OF_DOCUMENT_TOKEN_TO_BE_REPLACED