Murray Bacon has fought an uphill battle to be an involved dad with his two sons throughout his time as a father. While he feels the Family Court could have done better, he’s happy with how his sons, now teenagers, have turned out. 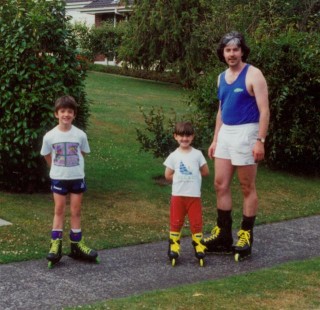 Murray and his two boys

One of the reasons I wanted to get married, was to raise children in a stable relationship. I wanted to share in the daily care, not to exclude my wife, but to share parenting with her and our families . My mother had spoken of the joys in caring for children and I wanted this experience too, for myself and for our children.

My father always played well with children, at our level. I remember from my childhood, how my father played with his older sister, they tickled each other, laughed and their eyes twinkled as though they were still young children.

As my wife and I were about to have children I felt pressure to work full time, at least initially. My wife’s financial expectations added to this pressure. She expected overseas travel and regular restaurant meals. These were items I saw as having to be put off while we put time into rearing children. We could still enjoy these luxuries in the future.

I was prepared to work more and to delay spending more time with our children to get our family into a secure financial position. I didn’t want us both to work so much that we would have to pay someone else to bring up our children, especially through their young years. I also knew that taking time “out” from a career would cost hours of work and hourly rate. I was happy to make these compromises for the care of our children.

When our first boy was six months old we agreed to move to England to try the lifestyle. My brothers had made really good money there. I work in a different field, so couldn’t expect the same.

My wife tried working again to develop her career but after UK tax, childcare and transport there was hardly any money left. It also added a lot of stress, which I felt we couldn’t handle, as it came back onto our son too much. Between work and travel each way I was away from home for 12 to 13 hours per day and usually most of Saturday too. When work project deadlines drew near, I was away even longer. It felt as though I got up and went to work, returned home and went to bed. I appreciated my wife’s energy to get us out to see the sights of London and southern England.

While the prospects in England were alright, the short term outlook and job insecurity made it better to return to New Zealand. Our second child was due soon, and my wife wanted family support with more children.

I soon found good work here and enjoyed having less time away from my wife, home and children. I enjoyed our second birth and seeing more of our sons’ lives. My wife, however, was becoming frustrated at being home with two small, energetic, boisterous children. I seldom found them hard to handle. I set practical boundaries and stuck to what I said. They behaved pretty well for me. Certainly our older boy pushed the envelope, but I loved taking care of them.

We went to a parenting course at North Shore Parents’ Centre and this helped greatly but after a while the improvements seemed to wear off. My wife still tried to negotiate with our then three year old, instead of imposing consistent discipline. I couldn’t sort these issues out after I came home from work, as discipline needs to be given quickly, to be effective. Having a fighting day also made our oldest boy harder for me to handle, once I came home.

My wife pressured me to leave for work later and to get home early. I had disciplinary proceedings at work, one of the issues being not spending enough time at work. I enjoyed a much better work/life balance, including more time with my wife and children than I had in England, but I was also depressed.

I didn’t want my wife to return to full time work, but she got a 9-5 job. Our children’s protests, at being dropped off at childcare, tore my heart out.

When our younger son was 2 ½, our relationship had deteriorated so much that she ordered me to leave our house. It seemed pointless to stay, as I could only see the situation getting worse.

I asked her about me taking care of the children and her working. When I reminded her about our verbal agreement over sharing care of the children, she told me “This is a new situation and I am making the decisions”. She refused to negotiate with me about the care of our children, as if she owned them. I had heard unbelievable stories about the Family Court, so I didn’t try a legal challenge. Then she put the children back into full time day-care, rather than care for them herself or allow me to care for them.

After some time, she offered to let me take some care of the children, but not for any agreed length of time. I realised that her agreeing to let me care for the children was dependent on my Child Support payments continuing while I cared for our children. With an agreeable boss, I took on more child care time.

I especially enjoyed taking our younger boy to PlayCentre. Some days I stayed on. I was the only father there. I talked with the women, but more often I spent time with the children. I wanted to listen, more than to talk. I wanted to understand the children’s and the parenting experience.

One day the younger son was rather grumpy. I hadn’t worked out the timing so that he would be rested when I got to work. In one of my contrarian experimental moods, I went anyway. As we neared work, he made increasingly ominous rumblings. When I got in to work, he curled up under my desk and slept. I just went about, as if there were no children in the office.

My workmates tolerated me taking care of my children. They didn’t seem to understand why I would want to do this. I work in electrical engineering, a rather ‘men are men’ field. To complete my work I was able to work through into the late evening. I was enjoying life and things always seemed to work out.

Then, my wife told me that she was off to England and Germany for six weeks. I was pretty furious, and scared that with so little free time in weekends, I would be hard pressed during evenings to complete my work. However, to my pleasant surprise, the satisfaction and happiness of total care-giving did make up for working until 1 or 2am fairly regularly. I feared her return.

When she returned, I soon went with our children to visit her. As I went to leave, she ordered me to leave the children with her. I tried to discuss this with her, but she refused. I made an application to the Family Court for the children to be returned to my care and their previous living and schooling situation. The hearing date was set for 13 months after the children were taken.

I had care of our children, both for three months then later just the older boy for 18 months, while my wife returned to England with the younger boy. Again, on her return she took the children back after refusing to discuss the care of our children with me. I tried the Family Court again. This time we got to a hearing after 11 months delay and with the same end result. I tolerated the Family Court values, but as a parent I could never accept them.

Both boys have done and, in their late teens, are still doing well. I would like to have given my children more time, but I realise that I have cared for my children more than almost any other man that I know.

I do believe that children have a right to a real relationship with both of their parents and to be able to access the best that both parents can provide.

To make decisions about parenting for their children, parents need access to information about the options open to them.

The best long term outcomes for children are obtained by parents who negotiate in good faith.

Next: Kids Need Granddads Too

As the history of Father & Child is at an end, it is time to reduce the hosting costs and... END_OF_DOCUMENT_TOKEN_TO_BE_REPLACED

Meri Kirimete and Happy Holidays! Father and Child Trust Auckland welcomes our dads, families and supporters to their end of... END_OF_DOCUMENT_TOKEN_TO_BE_REPLACED

The NZ Family Court has never been so keen for input from Dads. Andrew Little has announced a review of... END_OF_DOCUMENT_TOKEN_TO_BE_REPLACED

Father and Child Trust have been hosting events during the week before Fathers Day since 2010. This carries on the... END_OF_DOCUMENT_TOKEN_TO_BE_REPLACED