More and more Dads are being spotted picking their kids up from kindergartens, schools, and childcare centres.

Mark Nixon has many years experience with Playcentre, and offers a male perspective in a predominantly female environment.

When I was first at home alone with our new 6 month old, I thought to myself, “right, what’s out there to get involved with.” My first call was to Plunket. “Well,” said the woman on the end of the phone, “there’s our new mother’s group, but you wouldn’t be welcome at that…”

However, what she did suggest was Playcentre, and a few phone calls later, I was ensconced in the local Playcentre, and five years and two further kids later, I’m still there and loving it.

So what is Playcentre? Playcentre (www.playcentre.org.nz) is a New Zealand inspired parent cooperative which is based on mixed aged children (0-6 years) having free access to 16 areas of play. 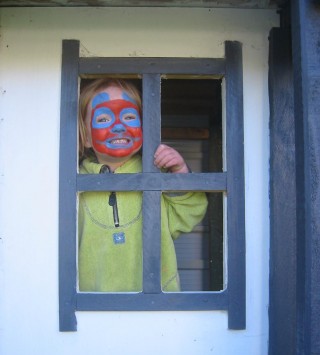 This means that children can wander from music, to carpentry, to the kai table as they choose. There are only three golden rules – no smacking, swearing or smoking.

As a cooperative, parents are expected to pack up at the end of session (usually ½ hour of all hands on deck). There is also the ‘parent help’ a few times a term depending on how many days they are enrolled.

Playcentre is not just about children’s learning; it also offers free courses and qualifications for parents, and I have to admit, this is where I have learnt some of my parenting gems over the years. Over 2 ½ year olds can be can be left if they are toilet trained and, of course, if they are happy to be left.

I have to say, there aren’t generally a lot of dads on session, but fortunately males around the place are appreciated, for example for the diversity of approaches a different perspective can bring to the children, and so I have always been made to feel exceptionally welcome.

Can’t say I do much at the wood-work table (can hardly hit a nail myself), but I do like pulling the trolley around with screaming kids at somewhat excessive speeds, making networks of tunnels in the sandpit, not to mention flying objects that can be made with a bit of baking soda and vinegar.

Also, my often singular male existence on session means that every now again someone else’s children calls me dad, which makes me feel a little bit special.

So to paint you a picture then: outside in the sandpit, a group of children make a mountain in the sand with plastic dinosaur models and twigs to recreate the Jurassic Age. Down the side of the ‘mountain’ flows a stream from a hose pipe spring.

One of the four year olds want to make a volcano so a mother with her baby in a front pack goes indoors to get the ingredients. Close by a 15 month old girl is painting driftwood (and the surrounds) in vivid orange paint, while her dad encourages this messy exploration. (Everyone agrees that mucky Playcentre play is something you would never try at home!)

Meanwhile, a three year old is playing with bubbles, water wheels, and a floating flotilla with a 11 monther in the water play area. Back indoors, completed collage creations are being set on the bookcase, and a group of children of all ages enthusiastically revel in music making with xylophones and a plethora of percussion.

Another good thing about Playcentre, is that it seems to be a place of like-minded parents. 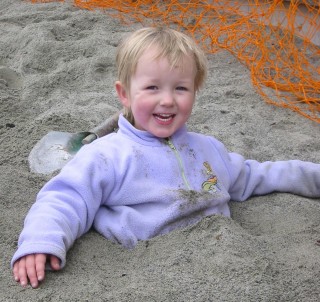 Almost by definition, those parents involved are ones that have made the decision to leave a parent at home with the children, at least some of the time. And as probably around half to three-quarters or more of the parents stay on any one session, at least at our centre, it’s both a social as well as a supportive group of people.

This has been important for me where most of my contemporaries seem to be plugging children into childcare and resuming careers with gusto, buoyed on by our leaders across the political spectrum …

The cooperative setting creates one of the best things about Playcentre for me, which is the involvement of everyone in everyone else’s families. This is of course great for me, with having three different ages on session (11 months, 3 years, 5 years), knowing that even the youngest is being watched out for by any number of adults he is familiar with.

And of course the other side of that, is enjoying what must be called a privilege of being able to be involved with other people’s families, and watching them grow up too.

In fact, having been there just on five years now, one of the “new-borns” that was there when I arrived is about to go to school, and I’ve got a bit of a lump in my throat with regards to that transition. Still, there have been three other babies born this month, so on it goes.

Next: Opinion: The Last Word

As the history of Father & Child is at an end, it is time to reduce the hosting costs and... END_OF_DOCUMENT_TOKEN_TO_BE_REPLACED

Meri Kirimete and Happy Holidays! Father and Child Trust Auckland welcomes our dads, families and supporters to their end of... END_OF_DOCUMENT_TOKEN_TO_BE_REPLACED

The NZ Family Court has never been so keen for input from Dads. Andrew Little has announced a review of... END_OF_DOCUMENT_TOKEN_TO_BE_REPLACED

Father and Child Trust have been hosting events during the week before Fathers Day since 2010. This carries on the... END_OF_DOCUMENT_TOKEN_TO_BE_REPLACED