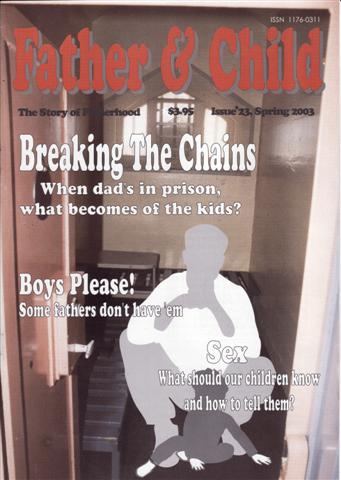 The Care of Children Bill vs Biological Dads

For those concerned emotions are flying high at the moment about the Care of Children Bill. The media have talked about the bill making “Lesbian Dads” possible, trying to frighten Joe Bloke with the suggestion that as a dad he’s entirely replaceable if this bill makes it into law.

As usual, the government has tried to please everyone, but didn’t come up with a very clean solution. First of all, the curious fact remains that a biological father is automatically liable to pay child support, but does not automatically have the right to even see the child-this is arbitrarily determined by whether or not he lived together with the mother of the child at the time the baby was born.

Secondly, the Bill makes it rather easy to obtain guardianship of a child-hence the “Lesbian Dads”.

Parliament has to make up its mind on where it stands on biological versus social paternity, instead of leaving it up to the Family Court to make that call in every individual case. At the very least, single dads who did not live with the mother when their child was born, deserve some legal protection without having to go through the court, and so does the child.

Government points out that the Bill removes the concept of “custody”, which implies ownership of a child, and replaces it with responsibilities.

Such changes have been made in other countries, such as Australia-but not much has changed on the ground as a result. The “mother principle” has remained, regardless of the wording of the law.

Given the much bigger support mothers usually have from organisations and agencies of all kinds compared to fathers, it is not surprising that Family Court decisions tend to go in mum’s favor-dad’s story is not heard, the strength of his relationship with his child consistently underestimated.

If a mother really wants to, she still can completely remove a most caring and responsible father from her child’s life with the Court’s help.

In the academic (and also political) world, much of the discussion focuses on werger a father is really necessary in a child’s life. Separated fathers interest groups, especially, tend to bring out an American “fatherlessness” statistics to counter claims that children with no dad they feel close to do just fine.

This is a bizarre discussion. We never talk about a mothers “usefulness” in a child’s life, but simply except the fact that she is there.

The same is not true for fathers: every child has one. Mum or Dad are not always the ideal parents, but should we really ask the question whether children need a mum or dad?

The Discussion about the Bill is perhaps a sideshow to the one we really should have: whether we acknowledge, and value, biological paternity, or whether a child’s “father” is whoever mum chooses.

Either way, men need clarity about where they stand as dads, and not have their (and society’s) assumptions about their “rights” as fathers proven wrong as soon as they enter the Court room.

As the history of Father & Child is at an end, it is time to reduce the hosting costs and... END_OF_DOCUMENT_TOKEN_TO_BE_REPLACED

Meri Kirimete and Happy Holidays! Father and Child Trust Auckland welcomes our dads, families and supporters to their end of... END_OF_DOCUMENT_TOKEN_TO_BE_REPLACED

The NZ Family Court has never been so keen for input from Dads. Andrew Little has announced a review of... END_OF_DOCUMENT_TOKEN_TO_BE_REPLACED

Father and Child Trust have been hosting events during the week before Fathers Day since 2010. This carries on the... END_OF_DOCUMENT_TOKEN_TO_BE_REPLACED