In old Europe, many kingdoms, institutions and their current incarnations, stand as regular reminders of the lasting impact certain leaders and their families have had. Just as in recent times I’m sure some have cemented their fortune or fame using foul or unfair means, but many more will have staked their claim for eternity on what was best for their people, then a strong paternal line!

In little, young New Zealand, not many families have established anything that might be compared with such dynasties. Many early Maori explorers have left their marks, each waka and tribe their worthy leaders or famous warriors, but a few father – son combinations in the All Blacks and one big building company still recently run by a grandson of the founder are just about all I can think of.

However, in this fresh, new end of the world anything is surely still possible. Hopefully, recent immigrants bring skills and aspirations, along with hard work and thrift, especially in business; they may even have a thing or two to teach New Zealanders .

In my role as Auckland’s Father and Child coordinator, I see examples of how fathers from other countries thrive here. I’m not sure if it is the same everywhere in NZ, but at my kindergarten and primary school, of the Dads who regularly collect their kids, at least half were born overseas.

This probably roughly matches the number of new Kiwi children, but what I notice most is the almost embarrassed look some Dads have, either enjoying the moment or realising that that they might be their family’s first father for many generations who enjoys close parenting.

While our boy was at kindergarten he met two boys from new kiwi families and they played well together. Like me, one of the other boy’s Dads was often on drop-off and collect duty. We looked after each other’s children on different days and they still play regularly at or after school. 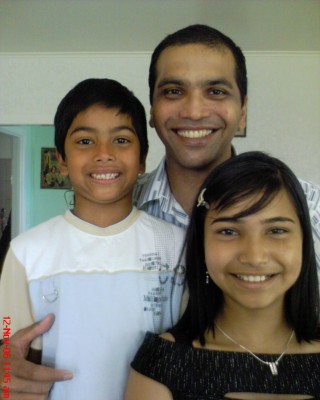 Ashley and his children

One of those dads was Ashley. He and his wife Malica are from Mumbai where they ran a drama course for under-privileged youth, culminating in a feature on national TV in India and many grateful students. Malica is now teaching at a primary school while Ashley has worked for Auckland Libraries. He shares…

“In India family structure is very important, so the role of father is different from Kiwi Dads.

Firstly, there is no welfare state or handouts for the unemployed. This means that there are virtually no single parents, there are either abortions or in some cases, abandoned children.

Divorce is also very rare so males are traditionally main bread winners, yet most urban families now have both parents working. Dads and Mums can work long hours. It’s quite normal for working parents to leave home at 7am and return after 7pm, 5-6 days a week.

Many parents have little contact with their children during the week and rely on grandparents or older retired family members to be the daily caregivers…an Indian tradition. Nuclear families who are better off may have a full time maid as a primary care giver while the parents work. There are very few child care centres though some factories do have crèche facilities to enable new Mums to return to work quickly.

When we arrived in New Zealand 5 years ago I was absolutely amazed to see Dads out having a run, pushing a pram, in the middle of a week day…..or even having a play in the park with their pre-schoolers!! The many organized day care centres not only provide a warm stimulating environment, albeit at a price, but they also give working parents great peace of mind and independence, especially if Nana and Papa are still working, globe trotting or just live too far away…. Then I met Brendon Smith who had given up his career to be a stay at home Dad while his wife worked!!! Absolutely unheard of!!!

New Zealand is amazing with the support parents get…employers are understanding and flexible when it comes to children, it’s not too stressful getting a day off to take care of a sick child….you can sometimes take your child to work if you are having a child care problem.

Sadly while the government and employers support families with children there are many children who live with only a single parent, either by choice or as the by product of failed relationships. In some cases there is a lack of commitment to relationships and to children, leading to a cycle of instability and unhappiness.”

Well, I did already suspect that childhood happiness must be related to stability, family and friends.

Our neighbours are from Fiji and we have seen both their parents visit, enjoyed their food and hospitality. With many local cousins, one a famous All Black, their school and village links are also strong. Once their old high school headmaster was guest of honour!

Late last year their boy William celebrated his ‘curuibure’ (coming of age) in traditional style, timed to allow his recuperation from the circumcision, and accompanied by a wonderful speech from his Dad. He welcomed his son into manhood sounding extremely proud.

Iliesa and Verenasi brought their young children to NZ for the education. While Verenasi works at Ascott Hospital as a nurse, Iliesa often organises the kids. He coaches William’s rugby team and finds time to be Choirmaster for their church! Bringing umu or hangi food into the neighbourhood, the Bilitakis are great examples of new immigrants doing good!

Last anniversary weekend, a few families camped on Motuihe for two nights, with children in pup tents including Neil and his son Chris from South Africa . When asked what was so different here, Neil enthused that he was able to coach his boy’s rugby and cricket teams. In their previous life, the schools provided all coaches and he would have missed out on all the heartaches and fun!

Gilles Petit grew up in the French Champagne which he describes as ‘old Europe’ with long agri- and viti-culture traditions . French fathers in his area usually went to work early and even when they returned home, were probably busy with adult affairs. He is grudgingly happy to live such a distance from his parents. In New Zealand for nearly twenty years, with his very Kiwi wife Jan, and boys Jean-Mark and William, Gilles gets to be a very attentive father.

As a pâtisserie chef, Gilles worked mostly mornings, although he had the boys most afternoons while Jan worked, but as the boys grew older, he realised that he was missing too much parenting time. Answering a call with his knowledge and experience, Gilles is now perfectly placed, lecturing at AUT, sharing his passion for cuisine with young students and being available to the family for most of the holidays!

With a regular Kiwi Christmas at their family’s Matarangi batch, eldest boy in an accelerated scheme for his first year at high school and second son having saved the game, in goal for his soccer team last weekend, who would want to live in the Champagne…?

I know my wife is pleased he has remained a local, as we occasionally benefit from Gilles’ skills, sharing dinner and throwing our kids together on weekend nights, hoping for adult respite. The children do get on, and his boys are great mentors for our younger brats, but our wives like it especially when Gilles shares kitchen secrets or ingredients and recipes. Food TV is never this cool! 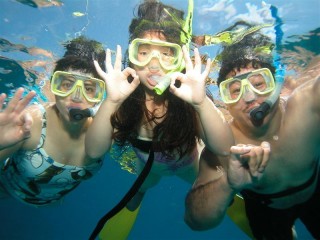 Toko and Nicole, with daughter Chanel

Our last dinner together was at Toko and Nicole’s new house, which they helped design and build.

Toko was a real boy of Samoa, once telling us how he would run to school, his best chance of breakfast being the fruit trees on the way.

Playing touch at lunch time hardly left any room for eating, so the evening meal was always his best chance of replenishing, along with an early rest.

Fit and busy, but well fed and achieving great grades, Toko became a Samoa rugby and league representative, then after university in Auckland and Palmerston North, a trained and qualified commercial pilot.

It was around then that his wife to be, Nicole, who had grown up in New Zealand, visited her home village and met the rising star.

Although she found Samoa’s macho culture a struggle, they soon married and were expecting their first child when a life changing sequence began to unfold.

They were only a few months from the birth of their first baby.

Report from online record:
On January 7, 1997, Polynesian Airlines Aolele Flight PH211 (a De Havilland Twin Otter airplane) crashed into Mount Sagato Iosefo near Moamoa, Western Samoa, killing three of the five people aboard.   The plane was diverted from the Fagali’i airport, and was instructed to land at Faleolo, due to bad weather caused by Tropical Storm “Evan.”   Approaching Faleolo, Captain Colin (“Gus”) Pyper was told to turn around and attempt a landing at Fagali’i; in so doing, the Otter crashed near Chanel College. (Tuiletufuga 01/08/1997; Vitolio 01/15/1997)

Toko has been wheelchair bound since the crash. He had three months in Auckland’s spinal unit, learning how to wash, get around and manage the wheelchair, then flew back to Samoa.

In Samoa, people unlucky enough to have a physical disability are talked of as ‘sick’ and not included in many activities or discussions. Toko was unable to drive so work was not easy, plus their first daughter had been born. Named Chanel after the famous school near the crash site, she was largely entrusted in Toko’s care. With all the dignity he could muster, almost no guidance and despite making many frantic calls to his now busy working wife, Toko did a fine job.

I know this because Chanel has been my daughter’s best friend since kindergarten. I know she is a sweet, beautiful girl with an excellent singing voice and a star of the school netball team.

Having completed a flash new house together, while Nicole was studying for another degree and with a demanding job himself as Ground Operations Coordinator for a new airline, I could see why Toko always had something to smile about, but little did I know that he had another reason.

Almost 9 years after Chanel, their second daughter Chiana was born and this time Toko feels comfortable spending lots of time with either baby, Chanel or both as Mum has to visit Samoa often with her new job.

I have seen Toko racing out of hospital to pick up Chanel from school, to save Mum leaving home with baby or just to see her and check how her day was. Meanwhile he’s built a retaining wall and dog kennel while I’ve hardly finished the lawns. I see him at the Warriors home games, Eden Park, the new netball courts and school sports. He is still an athlete and it’s no wonder his kids are too.

Some old Kiwis complain about changes in the market, lack of education or social stigmas, claim it’s not their fault that fewer men were involved in children’s lives. Meanwhile local studies link the absence of fathers to crime, teenage pregnancies, and in my mind, probably child neglect.

Yet I see these happy new Kiwi fathers, knowing that as things change, so they remain the same. Kids do better when Dad is around and men seldom feel more fulfilled than in growing good children.

Next: A Soldier and His Daughter

As the history of Father & Child is at an end, it is time to reduce the hosting costs and... END_OF_DOCUMENT_TOKEN_TO_BE_REPLACED

Meri Kirimete and Happy Holidays! Father and Child Trust Auckland welcomes our dads, families and supporters to their end of... END_OF_DOCUMENT_TOKEN_TO_BE_REPLACED

The NZ Family Court has never been so keen for input from Dads. Andrew Little has announced a review of... END_OF_DOCUMENT_TOKEN_TO_BE_REPLACED

Father and Child Trust have been hosting events during the week before Fathers Day since 2010. This carries on the... END_OF_DOCUMENT_TOKEN_TO_BE_REPLACED