Forget about national averages and 2.1 children per household. While most Dads can only imagine what it must be like to have six kids under the same roof, these Fathers wouldn’t have it any other way.

Hugh Joughin paid a visit, and talked to the blokes.

Two families, both rather large by today’s standards. Ten girls (!!) and one boy between them, and one central theme. They love their large families, and wouldn’t have it any other way.

“I always knew I wanted lots of kids”, boasts one of the Dads. How many parents today could say that with any form of conviction? The new “me” generation has enough difficulty finding room for the four wheel drive off-roader, new kitchen and master bedroom ensuite, let alone their own personal sports team.

But for Nick (youngest of three boys), it was a yearning he had had since his late teens. A large family was top of his “achievement” list. Everything else (parties, jobs, travel) came a distant second. “You have to really want to do it” (have lots of kids) he continues . He also strongly believes that “people are the most important thing in life”.

When they were starting out on having a family, there was arguably less financial pressure as there is today, but Nick firmly believes that having a larger family needs to be a conscious decision. Both parents need to be on the same wavelength in this regard.

He met his wife, who thankfully held similar family planning views (she herself was one of five offspring). Nick ponders whether there would be such an attraction in the first place, had these views been different.

So the first three babies appeared fairly quickly, thanks partly to the second pregnancy producing twins. Eldest children often have difficulty adjusting to the arrival of a new brother or sister, so it can be imagined how difficult it was with double trouble.

They were all fairly ‘easy’ babies however, who mostly got on well together. The twins sometimes got too much attention though, which would put number one’s nose out of joint. One day she took the law into her own hands and tried, thankfully unsuccessfully, to run them over on her tricycle!

The twins were also very adept at playing “sleep tag” at night, which actually involved not much sleep at all (most parents should be able to work out how that game works!) Then came a fourth girl (who was the most headstrong of the pack), followed by another girl, and finally a boy.

Nick insists they did not keep going until they had a boy. It’s just the way it turned out. If anything, the boy threw the household into a degree of uncertainty, just at a time when things were starting to become relatively stable.

Nick thought nothing of leaving the keys in the van when it was in the driveway. But for the first time ever in this family, while still in nappies, junior climbed in and tried to drive off. There was also the time when he found the lawnmower, and filled the gas tank with bird seed. For all those years, the girls hardly knew of the lawnmowers existence. 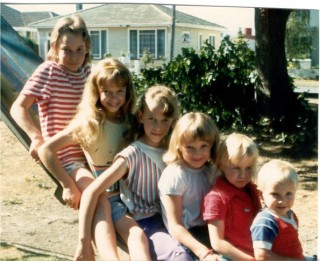 So with four kids under the age of five at one stage, and all six just 10 years apart in total, the house never had a dull moment. Any trips out the front door had to be planned well in advance, and meals out were very special occasions. The Bedford van was the necessary vehicle of choice, and it got quite a hammering.

Fairly soon there were only two tasks in the parents life. Official waged work, and unpaid chauffeuring. Weekends, afternoons and evenings were often spent that way, and children mostly got to their leisure activities on time.

The exceptions made for good stories, but unfortunately none sprung immediately to mind. Nick remembers many times at the movies where his family would take up the entire row.

They would usually buy a large packet of something to eat, which is customary at such events, and pass them down the line. Usually the packet would return in due course, but at other times would not be seen again. Because outings were special, they tended to be remembered and cherished more.

Whether planned or by accident, the eldest child had her drivers license very soon after her 15th birthday. Eventually and inevitably she was recruited into the driving ranks at the first possible opportunity. It freed up a precious little windows of opportunity, something that Nick believes has to be worked at with such a large family.

“You’ve got to make that commitment for some time away” he says. “Time out for us (parents) was neither a concept back then, nor an option”. A weekend away a few times a year, or outside interests became an absolute must, although it was often the hardest thing to plan. Helpful extended families have also been a crucial ingredient in the mix, something often overlooked in the busy day to day life of a large family.

Nick’s wife has completed many night-classes over the years (from calligraphy, cross-stitch and painting, to car maintenance and woodwork), just to keep some balance in life. Nick’s work was his escape in the early years, but he has had to think hard about outside interests as the kids have grown up.

“I suppose that could be seen as one of the negatives about a large family” he admits. “It can be all consuming, like there is no need for outside contact because we have it all right here.”

He believes there can be a danger that the children only relate to each other (as has happened from time to time), and both parents have been very conscious of developing friendships outside the immediate family group.

Having such a large family makes moving quite a difficult proposition as well. A good job offer in Wellington came up for Nick at one stage, but the move was just not practical. Increased money was no substitute for extended family and a stable home life.

According to Nick, the biggest jump comes from having two kids, to having three or four. Having twins second time around, the jump was particularly acute of course. Going from three to six kids however, didn’t seem like such a big deal.

Greg, the other Dad, concurs with this. “You could go from four to eight with little extra work load”.

Throughout my chat with him, he repeatedly takes the opportunity to recommend it to anyone. “I guess you could say that I haven’t achieved a lot money wise, but just look at what I do have” he beams. His kids are younger, all five are under ten years of age.

For him, one of the biggest challenges with so many kids is, ironically, not to do with the children themselves. Having so many kids forces an adult to abandon a lot of previously held beliefs and rules in Greg’s view. But Mum and Dad need to stay strong. “Keeping the link with my partner is vitally important. It’s so easy to lose touch with each other”, he emphasises.

“The kids feel a lot better when we are getting on OK, I can see that. It doesn’t have to be a bed of roses all the time, just as long as there is an effort to stay in touch.”

Both Dads echo the sentiment that the good far outweighs the bad. They are also just as adamant that they wouldn’t have it any other way, and would absolutely do it all again.

“The biggest challenge now is letting them go” says Nick. He likens it to retirement, with the opportunity to reinvent himself. “It’s an ongoing challenge” he says. Hardly surprising, given the demands of even an average sized family.

As anyone who has faced actual retirement can testify, those times in life can provide some of the toughest challenges yet.

Next: Welcome To Playcentre

As the history of Father & Child is at an end, it is time to reduce the hosting costs and... END_OF_DOCUMENT_TOKEN_TO_BE_REPLACED

Meri Kirimete and Happy Holidays! Father and Child Trust Auckland welcomes our dads, families and supporters to their end of... END_OF_DOCUMENT_TOKEN_TO_BE_REPLACED

The NZ Family Court has never been so keen for input from Dads. Andrew Little has announced a review of... END_OF_DOCUMENT_TOKEN_TO_BE_REPLACED

Father and Child Trust have been hosting events during the week before Fathers Day since 2010. This carries on the... END_OF_DOCUMENT_TOKEN_TO_BE_REPLACED